Google plans to use AI to conquer the job market 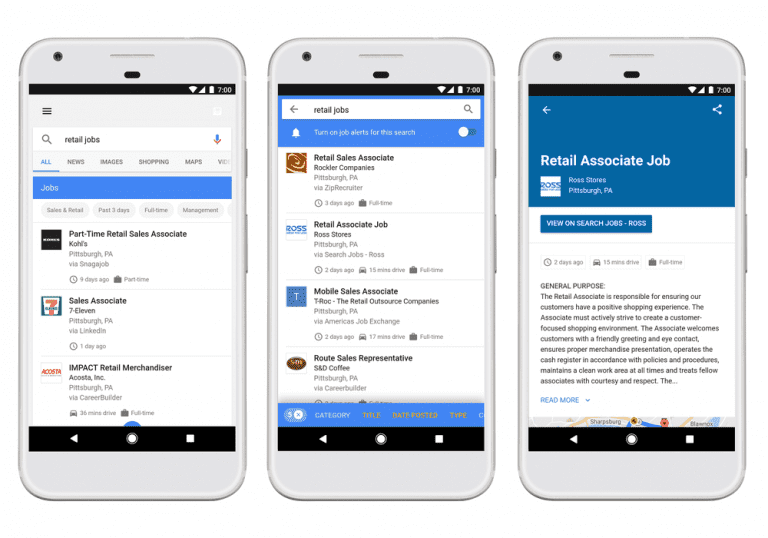 Google plans to use AI to conquer the job market

The future of recruitment and job searches lies with artificial intelligence and machine learning. And Google has already got the ball rolling.

Last year, the search engine giant launched ‘Google for Jobs’. This uses Google’s huge amounts of data to ensure an even better match between candidate and employer.

For now, Google re-posts jobs from other websites. Therefore, Google has not officially started their own self-sufficient job market. However, the long-term plan is that ‘Google for Jobs’ will have complete management itself. For the time being, ‘Google for Jobs’ is only available for US users.

The service was developed in collaboration with companies which have a large recruitment intake, like FedEx and Johnson & Johnson. According to Google, companies have had an 18% increase in the number of applications received, with Google’s help compared to their previous methods.

The ‘brain’ of the system

According to Google’s data, 46% of American employers face challenges with their recruitment and find it difficult to fill their positions with the right candidates.

With ‘Google for Jobs’, users can search loosely for “nearby jobs” or “teaching jobs” or similar. It will also be possible to enter a wide range of criteria that the jobseeker’s future job must meet. It could differentiate things such as specific working hours. Next, Google draws on the data the search engine has access to. Which is virtually the entire publicly available internet – and runs it through the Cloud Job API to come up with relevant results.

According to Google, for many jobs there will also be reliable reviews and assessments of the workplace, as well as information on the commute to the office. The latter is particularly relevant in the United States. There it is quite common to have a long commute to work every day.

Another feature of ‘Google for Jobs’ is a search engine, which keeps the candidate informed about new jobs that might interest them.

Google takes the job posts from many partners, including LinkedIn, Monster, WayUp, CareerBuilder, Glassdoor and Facebook. As well as the job posts from partners, Google also searches the rest of the internet for job ads. The service then passes these job ads on to job seekers, as soon as they go online.

Google is currently implementing this service throughout the entire American market.

The Mayor of Odense: “HR-ON is a fantastic component of the tech industry”