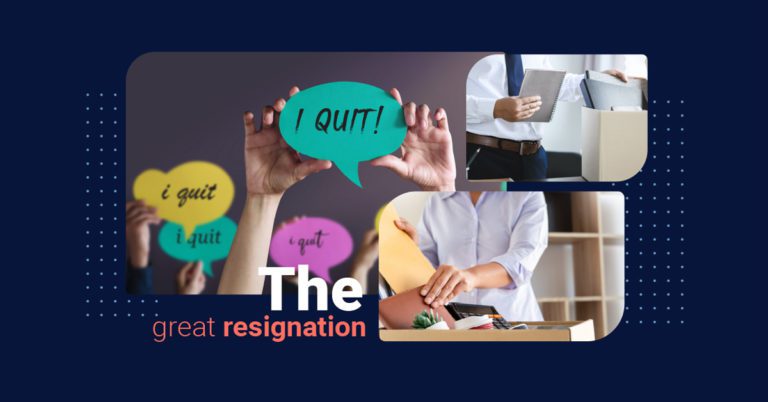 4 million. That’s how many Americans quit their jobs in April 2021. This sudden surge in people voluntarily leaving their jobs has been dubbed ‘The Great Resignation’ and this unusual phenomenon was first predicted by Anthony Klotz, a management professor at Texas A&M University.

The record number of workers quitting their jobs seems to come at an odd timing. Usually, a rise in quitting numbers is associated with times of economic excess. A stable economy makes workers confident that they can easily land a new job, if they choose to resign from their current one.

In the wake of the pandemic, however, we are still experiencing a distinct economic recession, which raises the question – why are people willingly leaving their jobs? A few pandemic related factors might have triggered this curious phenomenon.

Who’s quitting in the great resignation?

Studies have shown that the mass quit is mainly driven by resourceful employees with a solid safety net. To clarify further, it is primarily workers who have a personal economic opportunity to actually do so. Their current financial situation allows them to take a step back and consider what kind of work life they envision for their future before actively pursuing their next job.

However, not all people are quitting voluntarily. Other, less privileged members of the workforce, have reported that their private life and work life have collided significantly after life is slowly returning to its pre-pandemic state.

But why has the pandemic pushed people to actually act on their dissatisfaction with their present employment?

When the pandemic first swept across the globe one of the first answers to containing the disease was to social distance, and as a consequence of this millions of people now had to perform their jobs from their own private homes.

Working from home gave a lot of workers great freedom to plan their own hours, explore new hobbies and a great deal of time to consider and rethink their current employment, and what kind of professional future they would want for themselves. This unusual situation made many employees ask themselves if they could envision themselves ever going back to a regular 9-5 job, that left them little spare time to pursue other interests or simply spend more time with their loved ones. As we see now, the answer was in many cases no and the Great Resignation took its tentative beginnings.

While resignation was a conscious choice and a golden chance for many workers to improve their work/life balance, the pandemic left other less privileged workers with no choice, but to quit their jobs. As employers slowly begin calling people back to the office, especially parents are finding it challenging to maintain their full time jobs while taking care of their children as schools or daycare centers are yet to fully open. Consequently, they are facing the heavy dilemma of choosing between the responsibilities they have as employees and as caregivers. As women are still the primary caregiver in most homes, this has entailed that many resignations have been filed by women. In fact, so many women have quit their jobs that some commentators even consider calling the occurrence a “she-cession”.

Other analysts have suggested that the mass quitting is now in itself a driving force. As more and more people resign from their jobs, more vacancies become available – which in turn renders workers more confident that they can easily land another professional opportunity as jobs now seem to be around every corner.

What you should do as an employer

So, what does the Great Resignation mean for employers?

Well, as the Great Resignation rage on and has yet to show signs of slowing down, it seems that it is now more vital than ever for employers to consider what steps they can take to sustain their current employees. For employers, this should raise questions such as how can you create a working life that accommodates more to the needs of your employees, induce greater job satisfaction and in return foster employee loyalty.

But just as importantly you need to consider how you can attract the best talent for your organization. As the job market at present favors the job seekers, your potential new employees now hold the power to pick and choose between multiple job opportunities. Therefore, you need to consider what you can do to make sure that the opportunity you offer stands out to your potential new colleagues. Is the monetary compensation you offer competitive? Would greater autonomy in planning their own working hours be a way to foster employee loyalty? Maybe you need to make investments to adapt to the call for remote working opportunities? There are plenty of areas you could, and by all means should, contemplate when it comes to making sure that what you can offer as an employer is competitive in the current state of the job market.

In need of more information, this could be your next blogpost “Employee Well-being in Times of Change.”

We are moving from Human Resources to People and Culture – and you should do the same.