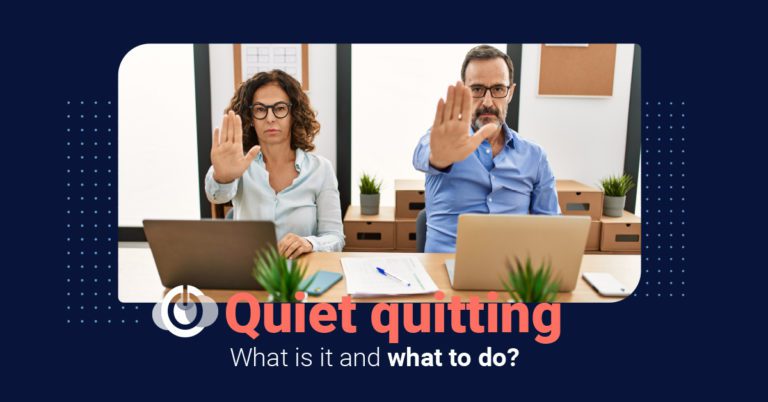 Quiet quitting – what is it?

A few weeks ago, a TikTok video ignited a conversation about boundaries at work and what they might look like in the year of 2022. A term that has since been dubbed ‘quiet quitting’.

What quiet quitting means is not necessarily what you think. It is not exactly the act of quitting your job, more so it is the refusal to go above and beyond for a job. It has been described as a coping mechanism to the hustle culture found in many workplaces, and a way to set healthy boundaries and above all to say N-O to any assignment that is beyond what you were hired to do. Simply put, quiet quitting

Quiet quitting as a solution to burning out

Even though the discussion of quiet quitting has not been around for long, the act itself has. Older generations may know it as ‘mailing it in’, a phrase that means to perform a job without commitment or effort. The difference is that while mailing it in generally only refers to a smaller task that you refuse to commit to, quiet quitting refers to your attitude towards your entire job. Some quiet quitters have adopted this attitude to protect themselves from burnout caused by picking up too many assignments that are both beyond their job description as well as pay level.

By people who are adherent to the hustle culture, quiet quitting may seem like an act of laziness. But what this phenomenon does and should do, is raise the question of why work culture has come to the point where people need to mentally tap out of their jobs to cope and even more so, it is important to ask why we are questioning people who refuse to do more work than they were actually hired to do.

What to do about quiet quitting?

As a manager or business owner, there is not much you can do if people decide to adopt the quiet quitter attitude when it comes to their work. As quiet quitting seems to be a protest against overworking, one thing you can do is consider how you can ensure that your employees don’t feel overworked and underappreciated. Maybe it is time for your HR department to look at which assignments that are considered extra, and that now falls between two seats. Maybe an extra employee would be beneficial?

Regardless of what you choose to do, be aware that it is a trend and some trends die out before they are even lifted off the ground. It could just be a stage, but either way it is a good opportunity for you to reflect on how you can support and motivate your employees, and hopefully turn it into something beneficial.

We are moving from Human Resources to People and Culture – and you should do the same.

Onboarding: How to ensure a solid start with onboarding