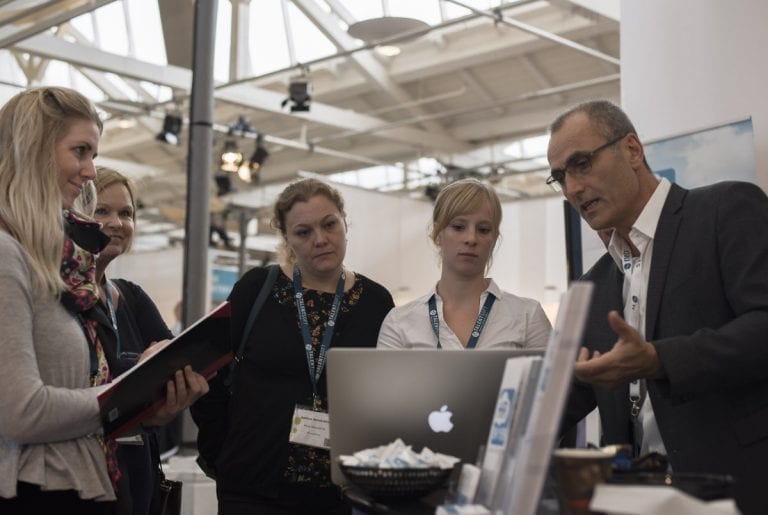 At HR-ON’s stand, guests were able to meet the Director of the company, Ali E. Cevik, among other employees. In addition, passersby could greet HR-ON’s robot, UR3, who was typing on a computer.

“The robot was to show some of the extra things we are working with, including the automating of work processes and also artificial intelligence,” Ali Cevik says.

The robot was placed on a chair and wrote an application on a keyboard the same way a human would. However, the robot has some additional benefits, such as the ability to work round-the-clock and never needing a vacation. With ease it moved its robot-hands and typed its way through the application, without a single error. UR3 only stopped working when it was interrupted by someone pressing the red coffee button. Then, it turned its attention to brewing some coffee, which it did just as flawlessly as typing on a keyboard.

The robot was programmed and configured in collaboration with two of HR-ON’s customers; Universal Robot and On Robot.

Besides this robot, this year’s big theme at HR-ON’s stand was the EU’s new personal data regulations, which came into effect on 25th May 2018. In recruitment specifically, companies receive a lot of personal data, which is a struggle to deal with (and to keep track of how they deal with it) without the use of an IT system.

“It is clear that the personal data regulation is very crucial to companies, which is why it is incredibly useful for them to have tools like HR-ON which ensure that they comply with the rules,” Ali Cevik says.

This was the fourth year in a row that HR-ON has attended the fair, which is organised by Dansk HR. Given that at that time the fast-growing IT business was only five years old, that is pretty much its entire lifetime.

“The fair gives us an opportunity to meet a lot of decision makers within our field, both current and potential customers, while also getting a lot of input from the guests visiting our stand. That is why we attend the fair,” Ali Cevik says.

More than 140 different professionals within HR had a stand at the 2017 fair.

How Secure Are Your Passwords?